Be Chosen by a Child

What is Chosen?
Or 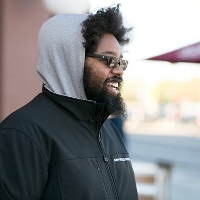 In March of 2015 I ran my first marathon.  The 2 goals were to make it past the finish line alive, and to hopefully get some kids some clean water during the whole process.  Well, it was a success....kind of.  I stuck to my training, and on race day my feet hit the pavement and battled thru the heat and the mile after mile after mile.  That proverbial "wall" people talk about was hit! I don't think I hit the wall, I think the wall came and smacked me in the face.  BUT, I got up and got thru it, and crossed the finish line.  And that year we also celebrated all the money people gave thru my page ≈ $10,000 and the hundreds of thousands more that we raised throughout Los Angeles. SUCCESS......kind of. After feeling the high of raising money and running, I decided to do it a couple more times. Ran a couple more half marathons, and a couple more full marathons and raised some more money.

Then in 2017, I took a trip to the DR Congo.  In some of the remote areas of this country is where my fundraising efforts were going.  I remember landing in a small village on a small plane (that the seats literally popped in and out of). My group and I were greeted by the World Vision staff and some people that lived in that village.  We talked, we learned, we ate, and then we walked around. It was amazing. I could see wells with clean water, I saw kids in schools, I saw crops growing and I saw life!! then we hopped in jeeps, and set out down a long winding and bumpy road. Then I saw kids not in school, carrying jerry cans filled with water. I saw huts with markings on the door which indicated who was sick and who was not, and sometimes who had passed away. We traveled further and visited a hospital with no medicine. Beds with multiple patients in them. I saw the opposite of what it was like to have access to clean water.  And it was during this trip that I knew, I needed to do more.

And so we fast forward to 2022. I've run 11 marathons and 16 half marathons AND HAVEN'T WON A SINGLE ONE!! Well I didn't expect to win, but still that's a lot of running. And if I'm being honest, there's no more runner's high.  I've added some more pounds around my belly and these races are tougher.  But I know that this temporary pain and discomfort I feel is nothing compared to what some of our brothers and sisters are experiencing.  So this is why I've added another marathon to the 2022 list.  I want to get kids sponsored.  I NEED to get kids sponsored.  And I NEED your help doing it.  Won't you please consider sponsoring a child? or 2 or 3 children?  It's a simple $39/month commitment, and it is so fulfilling and life rewarding! I wouldn't ask if it wasn't important, and I wouldn't ask you to do something that I'm not doing. Carolyn and I currently sponsor multiple children and look to sponsor more. Join us!